A bit of history

In 120 years, 400 to 500 bastide towns were being built. We can consider this as one of the major events in the history of the South-West.

The meaning of the word bastide.

In the language of the Languedoc, the word Bastide simply means a construction/building; later it got the meaning of "city under construction" (new city). It was also used to name a new district added to an old city.

Evidence has been found of a Celtic presence around Cancon, between 450 and 25 BC. In 511, this area was part of the Kingdom of the Soissons.

The coming to power of the Carolingians, a dynasty of Frankish kings who ruled Western Europe from 751 to 987, marks the beginning of the Middle Ages. The word "Carolingian" derives from Carolus: it is the Latinized first name of Charles Martel (690-741), the founder of this dynasty, but also that of his grandson Charlemagne (742 (?) - 814 ). The latter is considered the most illustrious king of this dynasty.

In 778, after the defeat of Roncesvalles, Charlemagne created the County of Toulouse, in order to coordinate his defence and the fight against the Vascons. This County is integrated into the Kingdom of Aquitaine, that was created three years later but fell apart around 850. The centre of power then moved to Poitiers, and the Counts of Rouergue, who also owned Toulouse, inherited it.

The era of the construction of the bastides

Most of the bastides were built between 1230 and 1350. This was a period of peace, in between the Albigensian War and the Hundred Years War. At that time, the Treaties of Paris of 1229 and 1259 had determined the political destiny of the region by creating two regions that rivalled each other: the Midi Aquitain was under English influence and the Midi Languedocien was under French influence. Gascony, located between the two of them, was therefore doomed to be endlessly disputed. This period also shows a remarkable economic boom, of which the bastides were an obvious result. How did such a boom started ? 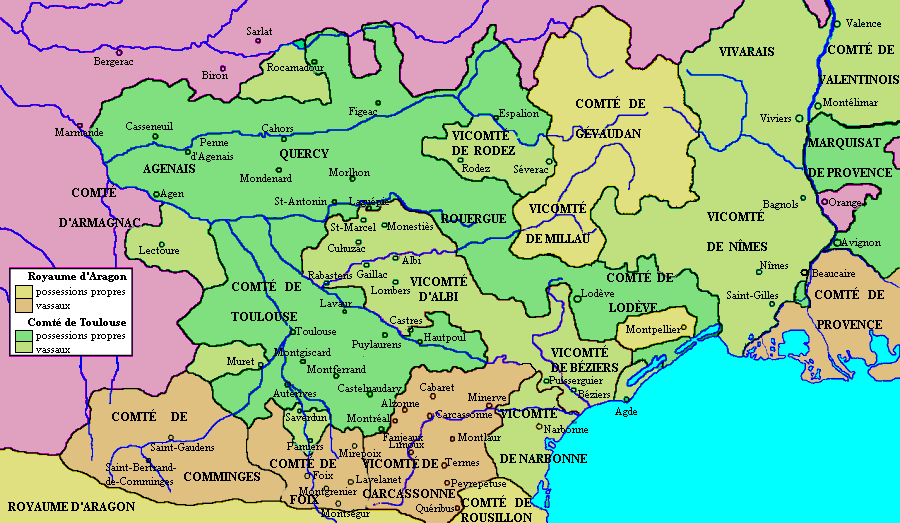 There are several reasons for this phenomenon.

First of all, the wars were almost over, for lack of combatants: the multiple conflicts had left the territories of the Languedoc, the Quercy and the Garonne Valley ruined, without defence and with less population than before. In this period of peace, the birth rates stopped falling, stabilized and then began to climb again. The population needed land to develop: their need for stability coincided with the desire of the Cistercian monks to use their wealth. Large parts of forests and moors, up until then unexploited, and located on the huge lands of the monasteries, were sold to the lords in order to develop urban areas.

The return to peace was therefore an essential condition for the demographic development of the region – actually a phenomenon that is rather logic !

Feudal powers were also essential in this development. The first bastides were built by Raimond VII, Count of Toulouse, who, with his successor Alphonse de Poitiers, brother of Saint Louis, played a decisive role in the history of those towns. Raimond was the promoter, and Alphonse the organiser and the one who gave these settlements the forms which would then serve as models for the next founders: kings of France or England, lords or even the Church.

Raimond VII, founder of the bastides

Raimond VII founded around forty bastides for political and financial reasons. With the signing of the Treaty of Paris in 1229, he had lost three quarters of the Languedoc, but he still had a vast seigneury around Toulouse, called the County of Toulouse. Today this would be the departments of the Haute-Garonne, some parts of the Ariège, the Gers, the Tarn-et-Garonne and the northern part of the Tarn. He built his bastides along the river Tarn. Some saw this as the desire to establish a line of fortifications, but no text or archaeological remains confirm this. In reality, the goal of his policy was to reconstitute, on this border, his domain, impoverished by gifts made by his ancestors, by obtaining land, by purchase or by trade, and by establishing a population that risked to emigrate towards the neighbouring seigneuries if he didn’t offer them a place to live.

In this way he strengthened his power and increased his resources: royalties in money and in kind from the cultivation of land, profits from speaking justice and taxes. The inhabitants also gained by it: they received land, often bare land that they could cultivate. They had materials, wood and quarries for possible constructions. They were also more secure and enjoyed the benefits of the protection of a powerful lord.

Raimond had the perfect conditions to found such towns: he was still, despite the Treaty of Paris, the largest landowner in the South. It was necessary to have enough cultivable land and forests for the present and future needs of a future town, but also to have complete jurisdiction to endow the emerging agglomerations with privileges. Few lords could say the same!

Unlike Raimond, who had used all possible means, legal or not, to develop his bastides (confiscation of land from people suspected of heresy, for example), Alphonse didn’t found bastides without preliminary investigations into the merits of his rights. Therefore, he inquired about the owner of the land and the date of obtaining the title, who exercised jurisdiction, what advantages and disadvantages could result from the foundation of a new bastide ... the building of a Bastide was sometimes abandoned, because there would be a conflict of rights of certain lords or older communities; others were suspended until the rights of each of the partners were better known.

When Alphonse de Poitiers felt he could meet a request from other lords, he used an already old form of collaboration: the ‘paréage’. This kind of contract is at the origin of most bastides. Two or more people shared their property and their rights in order to build a village or town, by means of an equal sharing of profits and costs: a true "société pour l'exploitation en commun" (Léon Gallet, The Treaties de pariage in feudal France, 1935). In these contracts, Alphonse provided the guarantee of his authority, he provided security and his powerful financial resources. His associates, Cistercian monasteries, bishops, local lords, provided the land and, most often, the rights of jurisdiction. At a time when land was the main source of wealth, Alphonse de Poitiers increased, in an inexpensive way, the usufruct of his land and his income.

Political and financial reasons, desire to extend their authority and to increase their income; it was always the same reasons that explained the actions of the last two counts of Toulouse, as well as their successors (the Kings of France) after the reunion of the county to the crown, in 1271.

Official acts and their advantages

The paréage remained, with rare exceptions, the only way of founding the villages. It granted all the bastides a weekly market as well as one or two yearly fairs, for which the act stated the dates. But the rules and regulation on the markets were not set out in detail, except in the ‘charte des coutumes’. This text, an agreement between the inhabitants and the lord, became necessary when the bastides prospered to the point of becoming a real center of exchange. A specific place for the market was decided upon, and nothing could be sold outside this place. All categories of goods, food, live cattle, raw products and manufactured articles, were taxed.

When you compare the two, new towns had gained advantages over older towns: regular markets and fairs were not often granted in other counties. It was certainly a privilege: the bastides quickly became important places of exchange. This was the goal sought by their founders, especially for the bastides built along the great valleys of the Garonne river, the Tarn river and the Lot river.

Document : extraction from a register of correspondence of Alphonse de Poitiers which confirms, in 1269, the ‘charte’ granted in 1256 to Monflanquin.

The charte des coutumes did not only set the days of the markets and fairs: it enacted the rules, rights and duties of all inhabitants. Villagers, noblemen, knights or clergymen: all had to respect the charter. Sanctions, the same for everyone depending on the offence or the crime committed, were also provided for. It was an egalitarian and democratic social organisation, rather ahead of its time!

These new towns gave lasting effects on the territory: created for the clearing and cultivation of immense lands, populated by free men, attracted to the town by important legal and commercial privileges, they firmly established the power of their founders. They have contributed, to a large extent, to the present way of life of the population in the South-West.

To learn more about the bastides and the Middle Ages, visit the Bastides Museum in Monflanquin!